The scream of the universe 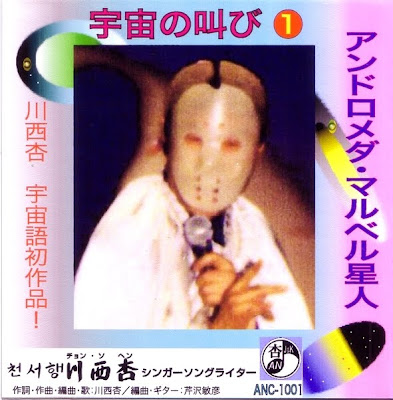 Amongst the shelves of the praised Nakano bookstore Taco che, there was no way to miss such a striking artwork, blending the best of karaoke computer graphics with a unique Friday 13th aesthetics applied to kayokyoku. But it took time to put a name on the enthusiasming music, and to decode the various infos provided by the garrulous yet obscure liner notes: something that was made possible thanks to the help of Tadao Takeuchi, from the band Tartine, who actually attended a Kawanishi Kyô concert during an Oz disc festival in 1993, and taught me most of what I know now about the man. 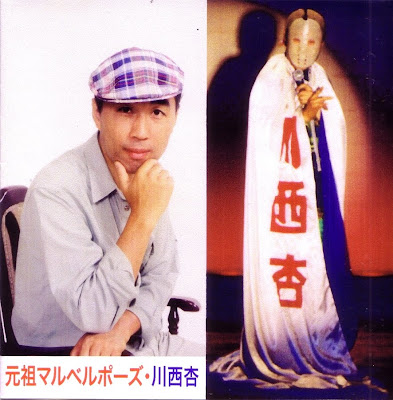 As written on the cover, here comes "the first work sang in the language of the universe": a statement that perfectly explains the highly specific use of onomatopoeia in the two excerpts provided here. In the booklet of his self-produced item, this japanese citizen, whose lyrics are for some reasons often historically obsessed by the situation of Korean people, is credited with more than 1000 songs written between 1988 and 2007. Something partly confirmed both by the "Volume 1" label, and by a few promo videos lost somewhere deep down youtube.

It would be hard to render the unique syntax by translating song titles such as "spaceship of the maruberu break". With an opening song directly refering to the Andromeda galaxy, it is almost impossible not to think he might have a astral match with another highly specific character, the lovely andromeda hime Aoki Ai. Direcly connected to the universe, he's also a bashful perfectionnist, who couldn't help apologising in his booklet for the recording quality. God knows how many other jewels are still somewhere on the shelves ...