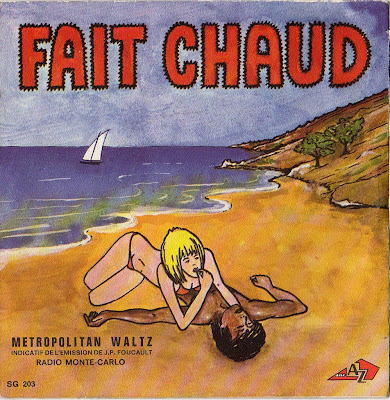 This is what I call "appropriate":

Under one of the most brilliant artwork ever seen among the dusty piles of french 7" production, you'll find a gently rascal easy-listening tune setup by a very specific team of people at the time:

Co-composer Bernard Gerard (with Jacques Datin) was a specialist in writing scores for various french movies (Melville, Lautner, as well as one of Michel Magne's favorite fellows and arrangers. Besides, Anne Germain who sings the soft background vocal, sang on some of the Magne soundtracks for Jean Yanne (see the well-known Jesus Java), often written or co-composed by her husband Claude Germain.
She also got involved in the production of dozens of flexible commercial 7" intented at the time for advertisement.