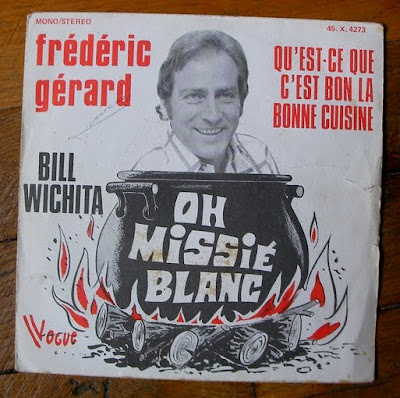 Behind the obscure "Bill Wichita orchestra", you will find producer Maurice Tézé (aso responsible for the lyrics of Henri Salvador's Juanita Banana) and Gérard Gustin, both active in the 60s, also especially for people like Sascha Distel.

A highly controversial track, layering its caricatural cannibal lyrics on an exotica fuzzy instrumental, that gives us the opportunity to reopen an uncomfortable specific dark folder in the library of french chanson production. Through the years, indeed, the country developped a collection of silly visions towards what was at the time the colonial world and its inhabitants: a wide range of songs, sometimes simply based on a bunch of exotic clichés, but also sometimes more openly offensive. You know, "oh, the funny black people ..." 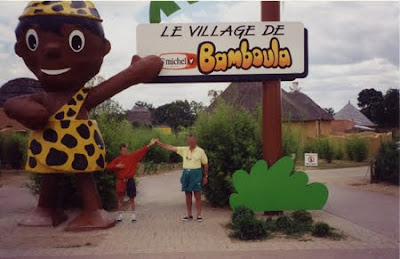 Although link may be obvious with the blackface practice, this tune also has to do with a countless amount of typically french gauloiseries that could be grouped under the Michel Leeb banneer. It includes, in no particular order: open odes to sex tourism, pathetic couscous song attempts (including Gotainer's advertisement), a unique example of 8bit racism, that was shamelessly broadcasted on the N°1 tv channel during the late 80s (accent imitation attempt + mix of djellabas and guys cleaning dustbins + of course the scooter in the story was stolen). Oh, and obviously him, our most unbearable uninhibited specimen.

On another level, there is also a controversy going on regarding the children's song Mamadou avait mal aux dents, in this case typically representative of an ambiguity that nobody will ever probably be able to solve: basically, according to lyrics, Mamadou has bad teeth, has lice, has no shoes and is fat. What a vision. But people who give him advice are actually his parents. Not Michel Leeb. Mamadou transforms the adult's wise advices into surrealistic things (toothpaste on bread, marmelade on his shoes). He might be seen as nuts yet creative in the rebellious way that makes children love him. Reports have been made that some children named Mamadou also love this song. Others have been persecuted. Please, comment.

You might also check that commercial production, trying with full force to transform a highly criticized advertisement character into a positive heroïc figure (according to the lyrics), in a desperate attempt to hide the company's original mistake. 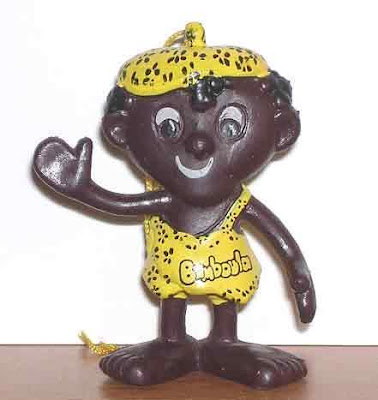 Also, let's recommend a detailed article related to the release and distribution of the compilation "le beau temps des colonies", angry with reasons, but also concluding that the topic might be a good opportunity to "launch a socio-cultural work in anthropology applied to the imperial gesture".
Publié par Plaong à 19:35