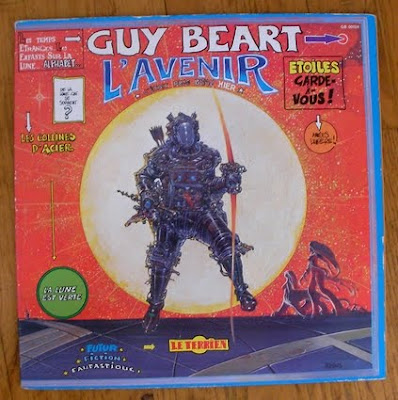 It all starts with an unreal flea market cheap curiosity: following Mister Aubrun's previous attempts to dig unprobable achievements of some famous french figures, here comes a titillating 1977 incursion from the emperor among all our traditionnal singers Guy Béart into the land of science-fiction and futurism. Under cover artwork by Moebius, we have to face a real collision between Beart's ultra emphatic lyricism and fender rhodes, wah-wah or synth pad backgrounds: there, he manages to pack his so often mocked chevaleresque poetry in a rocketship on the way to new moons, however still remaining faithful to his personality. 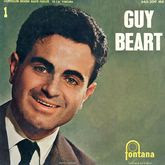 It is not a surprise to find the name of Roland Romanelli credited on that project: completing his 20 years' role alongside Barbara, he is also famous for being one of the space-synth all-time king, both with a solo carreer and a belonging to the extremely popular and futuristic band Space.


You can also note that Romanelli happened to be responsible of Nicolas Peyrac's Les sept jours de janvier OST that Mister Aubrun already highlighted in our pages, but deserves a second synthy extract here: 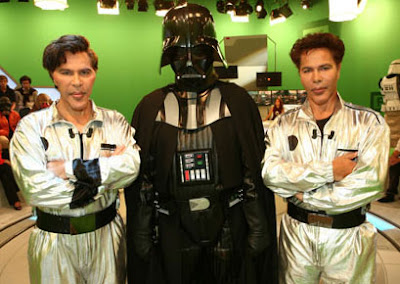 In their liner notes for Béart's L'Avenir, the legendary Bogdanoff Brothers insist on the fact that through his lyrics, he was one of the first to write science fiction songs. Béart was indeed an early science-fiction reader and this record is often a musical adaptation of previous visionnary texts he wrote: a statement confirmed by these two 1968 7' containing earlier acoustic versions of the same songs (artwork on the left being realised by Guy Pellaert)

I wouldn't miss the pleasure of quoting the Bogdanoff twice for the metaphysicaly appropriate conclusion this posts requires:

"Fiction of Being: the Man of Béart, this man whom shape gets more precise all along these evelen songs, is affected by an identity discomfort: "What pushes me to these competitions , while the grass is so green ?"
Publié par Plaong à 14:55