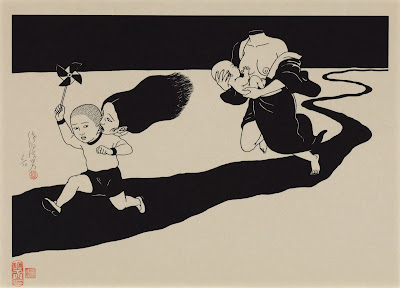 The numerous connexions between Toshi Saeki and the world of psych-folk music through LP artworks, already known from most of collectors and highlighted by the Works in music tabloid japanese edition published by Presspop in 2009, give me the opportunity to spread the word here that current Saeki Toshio's current exhibition in Paris at the Da-End gallery should be displayed a bit longer than expected, until mid-march 2011.

A worth-visiting one, even for those already familiar with his production, regarding its interesting selection of both original drawings and prints, including a few sheets detailing his instructions for setting colours.

Among the various artworks that Saeki regularly produced for the living legend Mikami Kan, here above appear the one for Hiraku Yume Nado Arujanaishi, one of his most celebrated output from 1972, and the 1991's world of Kan Mikami . However, I'd rather allow myself to focus on a release which artwork wasn't produced by Saeki, but that strangely always was the one among Mikami's release I revered the most: a scarce live recording from 1970. 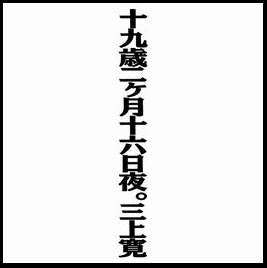 From all the people gravitating around P.S.F. records, Mikami is maybe the one whose popular roots (born in a small fisher's village that he left when turning 18) irradiate the most: something you can feel in that specific form of blues that only belongs to him, on a unique edge between idiom and freedom. Something that sweats also from his strongly physical involvement live, playing with his body sometimes in a very specific purposefully humoristic way he developped through a monster career, in which also the relentless repetition of some specific chords evolved from a trademark to a purposeful and meaningful obsession. 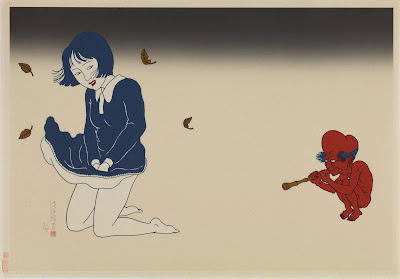 The text by Shuji Terayama, introducing visitors to the world of Saeki for the exhibition, indirectly reminds us the connexions between all these artists in the late 60s: Mikami Kan appeared himself in one of Terayama's most famous movie Pastoral (Den-en ni shisu). Although the video extract of that specific performance recently and sadly got removed, you can still have a look at the teaser of that whole gem in itself.