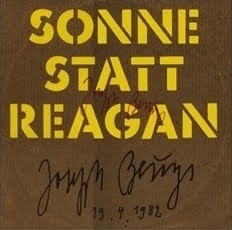 Thanks to the encyclopedic UbuWeb database, Beuys' sonic production is now open for exploration in every details. Although his whole performance activity generated various recorded LPs, from spoken words to piano performances, I wanted since a long time to include here his 1982 unique incursion in the world of pop-song with the band BAP.

Pure product of the cold war and fear of the atom, such an anti-Reagan protest song had to be based on a catchy wordplay: Reagan = Regen = Rain, therefore we want sun instead of rain.

Although the result might now appear absolutely unprobable, it should be replaced in the context of Beuys' general attempts to link arts and politics, avant-garde and popular field, and should also be seen as a contribution of someone whose experience of the war was real.
Please notice the specific stage setup for TV appearance where the singer actually places behind the drummer, though. 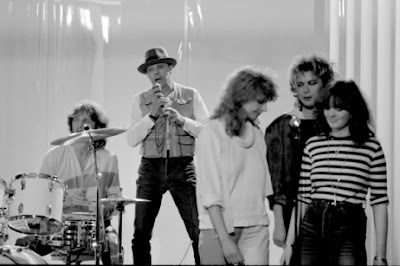