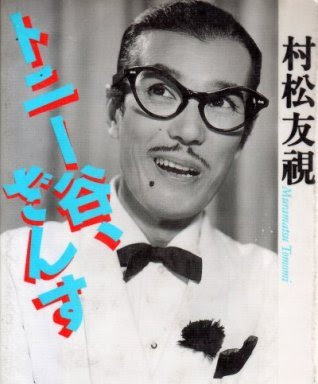 Extract of a 2005 must-have cd reissue still avalaible here, Saizansu mambo is maybe the most representative hit of Tony Tani. As a beloved popular actor, he also stays in the memories of many as a master of the abacus, tirelessly demonstrating his percussive skills on that tool year after year along family tv programs.

Although this TV appearance is from 1982, the original version from the 50s is a pure old school mambo classic. Therefore, he easily could be seen as a japanese alter-ego of the french Bourvil: both had this unique ability to build and camp a sympathic and memorable comic character, doing a crossover between movies and chanson and sneaking their personnality into these typical 50s latin instrumentals, from mambo to rhumba.

Enjoy a quick comparison between this frenchy nugget and these two movies extracts in which appear his two biggest hits: Saizansu mambo and Bukubuku mambo:

Both belong to a recent past that often appear dusty to youngsters: being too much in the light among your dad's generation blinds most of the wannabe trendy, although Tony Tani is still sympathic to most of the initiates.

As often with such classic icons belonging to popular culture, a now sold out 1988 remix attempt was released on 7" just after his death in July 1987, an item I discovered thanks to the precious Record Battler monthly live stream event: a use of sampling that is typical in the techno kayo 80s period, alongside interesting shuffle TR808 patterns, although it didn't completely preserve the specific groove of the original version. 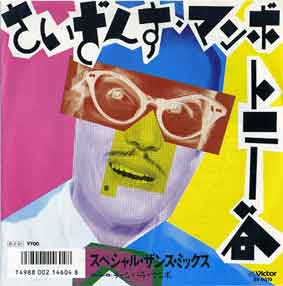