"Nightingale of the Orient" 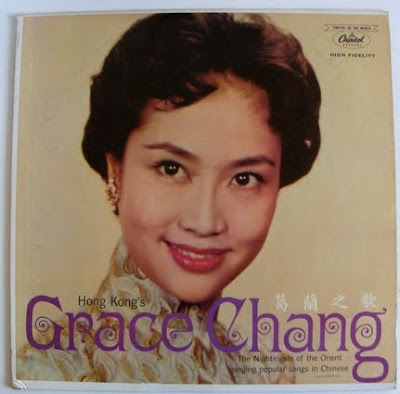 First artist from Hong Kong to appear on American TV, Grace Chang had such success singing in the Dinah Shore show that Capitol records shortly decided to release a LP afterwards, sung in chinese, but split between an A-side blended of various wordwide styles (Mambo, Calypso, Hawaïan...), and a more traditionnally chinese B-side.

Liner notes try to both explain and justify the use of these various musical styles more familiar to american people: "The colorful port of Hong Kong, one of the busiest in the world, is a melting pot of music from all over the world. Businessmen, travellers, immigrants, students, sailors, everybody brings his music (or musical preferences) when he comes to Hong Kong, and the result is a free exchange unmatched anywhere else. In the selections of this Miss Chang dips into a world-wide variety of styles, and comes up with a demi-dozen of surprises to delight you." 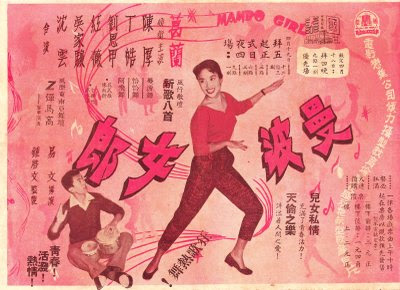 I love Cha cha is an extract from the 1957 movie Mambo Girl, classic but charming musical produced by MP and GI film studio (main rival to the Shaw Brothers). This huge commercial success definitely turned her into one of these delightfully out of time musical icons, a statu confirmed later by various killer sequences like this 1960 floating carmen cover extract from The Wild, Wild Rose: