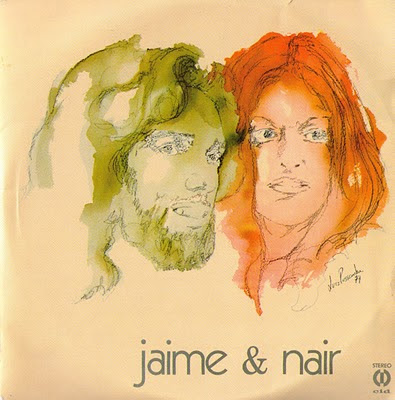 The duet of proggy-folk heads Jaime Alem and Nair Cândia was the rarest of things: a unit that managed to be both sweet and challenging. Akin to the hazy, vaporous, candid and complex masterpieces of a few Brazilian acts of the 70s (everything Joyce recorded between 1971 and 1980, and most of the Clube da Esquina related acts after the Nascimento and Lô Borges eponymous 1972 album), their breezy yet slick pop music was a dreamy super mixed bag of tradition and forecasting, latin and Western, earth and air. In terms of etiquettes and in spite of its superficial slickness, it contained even more multitudes than the most excessive and cannibalizing melanges of Tropicália - western folk music, country music, psychedelia, post Beach Boys polyphonies, modernist samba, Nordeste forró and Rio de Janeiro choro - but in a much more cohesive, solid way than most crossover contemporaries (I'm thinking of futbol fans Novos Baianos, for instance, who quite simply, even if effectively, played bossa nova licks and hyperactive samba to typical 70s electric guitar pyrotechnics). A solid composer, São Paulo born Jaime Alem mostly composed soundtracks for theater plays (and Maria Bethania) before lauching the duet - with his wife Nair - that would make him famous. Most of the LPs they recorded together are low-key gems in their own rights - predictably enough, they recorded the obligatory cover albums of Jobim and Nascimento - but nothing touches their first eponymous album of 1974.

"Sob O Mar" ("under the sea"), the opening song, is classic 70s stuff (those strings, those strings!) and seems like it was plucked from the masterpiece Nelson Angelo e Joyce, but it's brilliant and cosmic (allright, seaborne) in its very own manner.

Starting ominously in beatlesian manner, "Nevoa Seca" ("dry haze") goes further in the crossover direction: it's got slide guitar à la George Harrison, europop strings (panned on the left) and doesn't sound Brazilian at all - except for Jaime's voice and words, which seem oddly inappropriate in such a lushly European context. Of course, it's beautiful, too.

Playing the crossover game in modest and inconspicuous manner, "Sabia, Diga La" is probably the most adventurous of the bunch; it's wearing all the characteristics of a 70s country rock song on its sleeve, but it's driven by a typical Brazilian beat. And need I mention the grandness of its chorus?