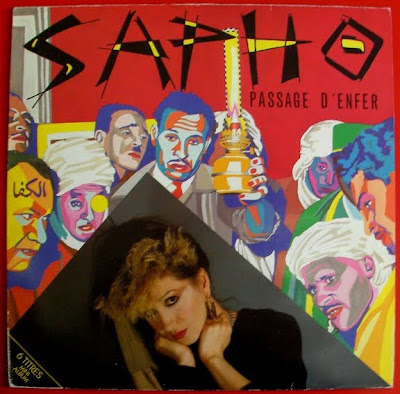 Under a cover artwork by Kiki Picasso / Bazooka, some unconventionnal 1982 recordings by french singer Sapho, hard to classify, on the edge between underground elements and a general classic 80s studio chansonesque format.

Born in Morocco, with some jewish origins, contributor to the french legendary magazine Actuel, infused in a punk background as well as incorporating world music elements, singing in french, arabic, hebraic, early militanting for palestine...
The specific blend of this record might be partly explained by the singer's biography, but also by something specific in that early eighties french period, as it looks like the lady herself and the team of musicians credited took a different direction later towards more classic chansonesque neighborhoods.

However, nowadays varnish shouldn't hide the strangeness of these surprising early oddities, related to a golden age that also turned another lady into a now classically cult french icon: Lizzy Mercier-Descloux.